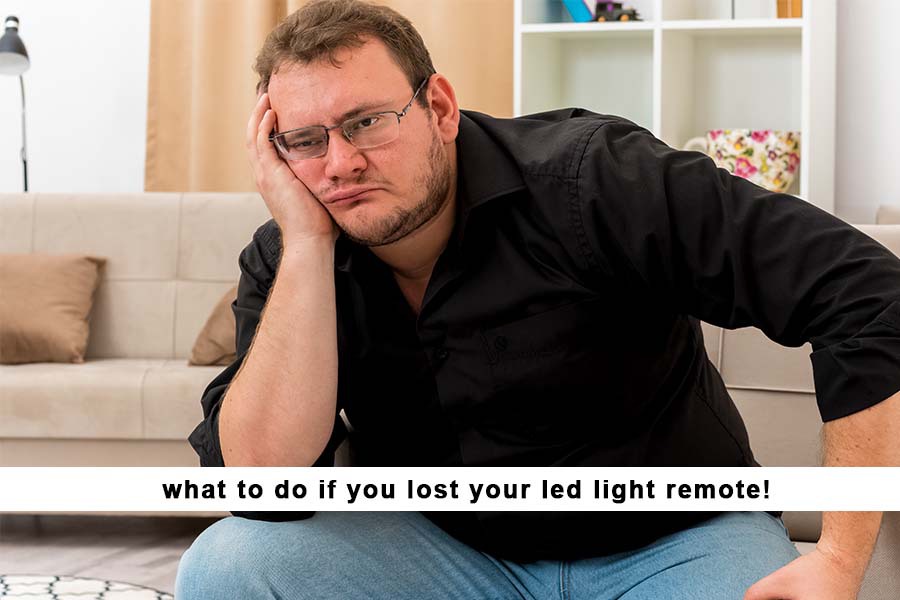 LED lighting is usually handled via a remote. The remote control is used to operate the many functions of a Light bulb.

As a result, it is critical that you protect your remote and do not misplace it. Several consumers have mentioned misplacing their LED light bulb controller.

As a consequence, the consumers get anxious and begin to wonder what they need to do.

There’s nothing to be concerned about if you’ve found yourself in a similar scenario.

What to do if you lose your LED light remote control will be covered in such circumstances is:

Plugging it directly into the power socket

This method is pretty easy to accomplish. However, it may not be the most practical for long-term usage.

All you have to do is connect your LED light into the socket, keep it on, and then disconnect when you want it to switch off.

However, this method will not work with all LED lights. For example, some LED lights have their remote and power functions integrated as one, and in that case, you probably wouldn’t be able to connect the lights directly to get them to operate.

Besides the hassle of continuously plugging and unplugging your LED lights, you will also be unable to enjoy the LED light’s spectrum of colors and brightness.

Replacing a lost remote is perhaps the most effective and, overall, the best solution. To do so, visit the store where you bought the LED lighting or contact an online vendor such as Amazon or eBay.

It would be best to get a controller for the same LED light type and model that you have from the same brand. Typically, you can get all of the details you want regarding your LED lighting on the internet.

If this doesn’t work, you might have to check your invoice/receipts or search around until you identify the lights you got.

You should ensure that the new remote you buy is interoperable with your LED light. This is essential when dealing with voltage requirements.

You may manage this by comparing the particular specific models as well as other key performance indicators from your LED light. And there is a multitude of universal remote controls for LED lights available that may be useful.

Look for an app

There are a number of apps that allow you to control some LED lights. To see if yours is compatible with any of these apps, run a search for your LED light model to see what shows up on google.

If you have an LED light that a mobile application could regulate, you won’t have to switch your remote control because these apps generally provide all or most of the features that a remote offers.

Buy a new one

If you can’t locate a functional remote or get it to operate through a smartphone app, you’ll need to purchase a new LED light.

Even though this isn’t the greatest or most optimal solution, it’s certainly the best if you need to control the power going into your Light bulb.

Fortunately for you, LED lights are now much more affordable than it has ever been, and configuration is generally simple.

Is it possible to switch on a remote-controlled LED light without using the remote controller?

It is dependent on the setup. If the remote receiver function is distinct from the power supply, unplug it and put the power source into the light- they generally share the same connections in the circuit.

The bulbs are then controlled by the power supply’s flip, if one exists, or by plugging and disconnecting the power source.

If there is just a single box (power supply and receiver), you will need to purchase a separate power supply. The majority of them are 12 volts, but you should double-check.

To acquire a comparable device, you’ll need to know the power rating of the one you have. Typically, the rating is written on the exterior.

WiFi-equipped wall switches can be switched on and turned off with voice control if you have purchased an inexpensive LED light with no remote and have Amazon’s Alexa or Google Home integration.

Likewise, you don’t need the remote if the light can be set to turn on with power restoration.

If this seems hard to you, I recommend simply purchasing a new set of everything – they are not expensive these days.

If you’ve misplaced your LED light remote, follow these steps to get your lights operating again. We recommend purchasing a new remote if you can’t seem to find one.

Purchase a new pair of LED lights. They are no longer prohibitively costly.

However, there’s not much you could do without a remote control. And that is why we suggest purchasing a new set of tools. However, you may give it a shot to the solutions as mentioned above, and they might work for you.