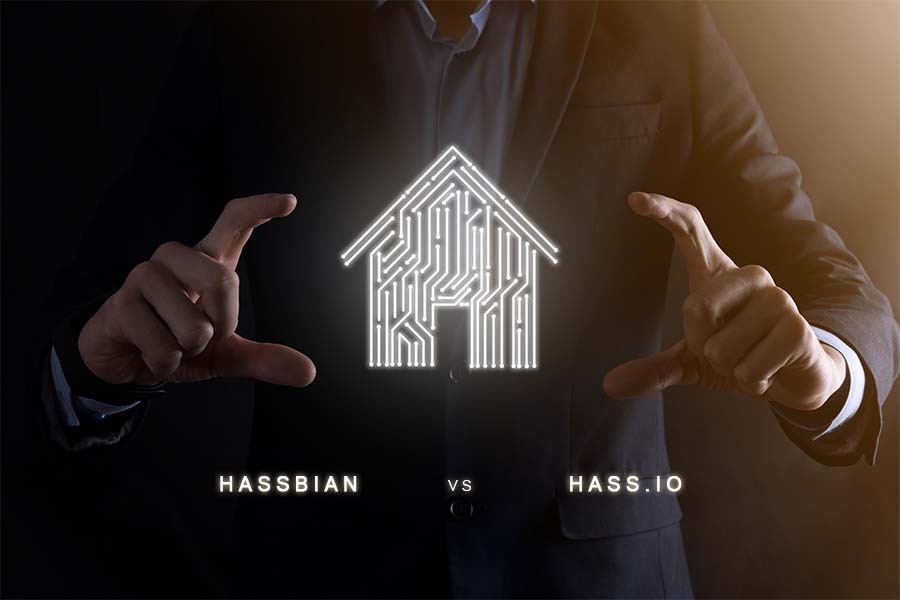 Hassbian and Hass.io are both smart home automation solutions that may be utilized for a range of applications.

They are preinstalled with Resin OS and Raspbian (Raspberry Pi) and HomeAssistant, an integrated operating system. The software simplifies the installation of programs like Z-Wave.

Hass.io is an excellent choice for a novice. However, the program has one major drawback: the customer is not granted administrative control over the operating system.

As a result, even though the Raspberry Pi 4 has adequate capacity to operate not just to Home Assistant as well as a handful of certain other applications, you won’t be able to incorporate this for other tasks after installing Hass.io on it.

Hassbian, on the other hand, is a Raspbian installation that has the Home Assistant system pre-installed in a virtual Python setting.

Unfortunately, however, the program is no longer active, and thus no new projects centered on fresh Raspbian installations with updated editions of Home Assistant are available.

Hassbian is a heritage that was or ran Hass; it’s a Raspbian OS, preloaded in Python VirtualEnv, and Home Assistant.

It contains scripts that enable you to upgrade and deploy other software, such as ZWave compatibility and such features. Unfortunately, it is not managed or serviced at this moment anymore.

Hass.io on the Raspberry Pi is an excellent way to build a smart home hub for Raspberry Pi.

For a number of smart home gadgets and services, including Z-Wave and Ecobee, such as my intelligent LEDs and Google Assistant, We have discovered a straightforward connection with the Plex media server software.

It’s ultimately a cost-effective project concept, which offers a tonne of features.

While Hass.io is simple to use, it is a single launch of Home Assistant. Instead, you might use Hassbian, which is a Raspberry Pi image that includes Home Assistant.

The advantages of Hassbian over Hass.io also included the possibility of incorporating a graphical user interface (GUI), SSH configured from the start, and GPIO pins available to deploy.

Proceed by saving the Hassbian image to your hard drive. You will need to use a program like 7z to extract this.

Afterward, using a tool like Etcher, transfer the extracted picture to your microSD card. When you’re finished, insert the microSD card into your Raspberry Pi and turn it on. If you are using a wireless connection, you will also need to change the wireless setup.

Which one is easier to set up: hassbian vs hass.io?

This is really significant to a lot of individuals. However, when it comes to making them work and using them for the first time, neither is particularly difficult or complicated.

Nevertheless, Hass.io is quicker and easier to start up than Hassbian. Customers have also stated that it is simpler to use since it has a more user-friendly UI.

Another point to note would be that Hass.io is fairly simple to use and operate. So far, customers have experienced no difficulties with the gadget.

The Snapshot Option: hassbian vs hass.io

Hass.io has a one-of-a-kind snapshot function. Customers may store all of their configurations and details with this function. Then, one can quickly reload the snapshot they earlier saved whenever it is comfortable for him.

It’s particularly handy if you’re constantly fiddling with the configurations. You may alter a number of your settings due to the snapshot function.

If you make a mistake with your configurations, the snapshot function enables users to restore the already stored configurations effortlessly.

Both offer add-ons; however, Hass.io includes extra add-ons which can be readily installed. For instance, activating SMB on a Hassbian system requires a significant amount of effort and complexity. This is due to the fact that all of the add-ons are pre-configured.

Nevertheless, due to the SMB add-on, it’s as simple as pressing a key. Utilizing these add-ons, you may gain up to 95% more features and functionality.

This is a fantastic method to save time. You may invest a significant amount of time customizing items or adding them with a single click utilizing an add-on.

The majority of its basic functionality will be available to you in a relatively short period of time.

In comparison to the Hassbian, Hass.io misses the mark in this area. The problem is that it isn’t as customizable as Hass.io.

Indeed, Hassbian is more difficult to use. However, there are a couple of benefits to doing so.

Hassbian, for example, can handle more complicated jobs. You may also link your Home assistant with a variety of other devices.

However, the majority of the user community does not require such additional features. Therefore, you must first decide how and in what capacity you will use it for home automation.

Updating Is Simple: hassbian vs hass.io

Hass.io has won by a wide margin. Hass.io is incredibly simple and straightforward to maintain. It will keep updating itself with only a press of a button.

Hassbian, on the contrary, is difficult to maintain. If you try to upgrade Hassbian, you’re practically on your own.

When it comes to Hassbian vs Hass.io, each has its own set of applications. However, we can plainly observe that Hass.io is better suited to individuals searching for entry-level home automation, which is easier to operate.

Hassbian, on the other hand, will allow you to do certain sophisticated functions and will be much more complicated and challenging to utilize.

Hass.io comes highly recommended. Finally, it is up to you to make the ultimate decision.